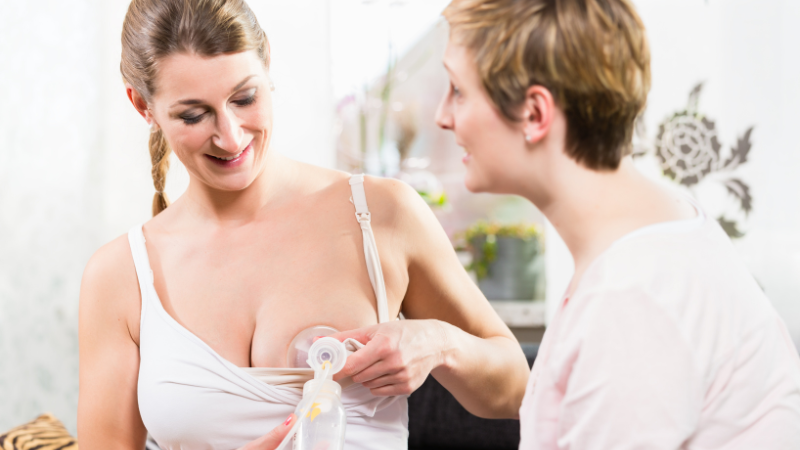 Many women are concerned that their breasts and/or nipples are not the ideal size or shape for breastfeeding. In reality, the size and shape of your breasts don't really matter when it comes to breastfeeding. Nipple shape only affects a small percentage of women, and breast shape is rarely important. Even flat or inverted nipples will not prevent breastfeeding as long as your baby can consume a mouthful of breast, and your baby's powerful suction will probably draw the nipple out. Mothers with inverted nipples may find it more difficult to get their babies to flat nipple latch onto the breast properly, but most of these mothers will have minimal trouble nursing with a little preparation and flat nipple solutions.

Inverted Nipples: What Are They?

The centre of an inverted nipple is dimpled inward. It might always appear this way or just when stimulated. Sometimes, inverted nipples might sink into the breast tissue or even retract back until they are level with the areola.

When you don't try to compress them, some nipples might not appear inverted, while others might appear somewhat dimpled. Nipple inversion can range in severity; in mild cases, the nipple may just be marginally inverted and easily pulled out with fingers. In more extreme circumstances, the nipple profoundly retracts into the areola, creating a dimple.

Until you start nursing, it's possible to have inverted nipples your entire life without realizing it. However, in some instances, engorgement or swelling brought on by IV fluids administered during birth can result in temporary inversion.

How can you tell if you have inverted or flat nipples?

Try the pinch test to determine what you're dealing with if you're uncertain. This is how:
Approximately 1-2 inches from the base of the nipple, place your thumb and first finger on the areola. Your nipple is regarded as flat if it does not protrude or extend out when your thumb and finger are pressed together. It is termed inverted if it retracts or sinks in. Rarely are nipples truly inverted. The absence of nipple movement in response to stimulation or cold is another indication of flat or inverted nipples. If your nipples protrude (stretch out) when aroused, breastfeeding shouldn't be an issue

Why do nipples get flat?

Some women are born with this problem because their nipples are trapped inside the breast tissue and don't protrude as they should even when they are exposed to stimulants.

Your milk ducts are unaffected by the flat or inverted nipple condition, so you can continue to produce milk and let it out from the nipple as usual. Many first-time mothers are unaware that breastfeeding can frequently work as a "treatment" for inverted nipples. Your baby's forceful suction on your breast during feedings can break up adhesions that are the cause of inverted nipples, allowing the nipple to protrude more over time.

Although nursing can be more difficult but is not impossible when the nipples are turned inward. Continue reading for suggestions for natural treatments and useful advice.

Rolling the nipple with the hands prior to breastfeeding may be useful for mothers who have "shy" nipples, which are flat at first but become erect with stimulation. Hold your hand with your fingers below and your thumb above, about half an inch from your nipple. Next, use your thumb and fingers to run a piece of fabric along the areola/base of the nipple to feel how soft it is. You may also form the letters "C" and "V" by wrapping your fingers around your nipples.

Another one of the best flat nipple solutions to get the nipple ready for feeding and give it an instant shape is to invert the nipple pump for a minute before putting the baby at the breast. The vacuum pressure produced by the electric inverted nipple pump creates just enough suction to draw the nipple out, making it easier for your baby to latch.

Use a nipple shield, a spherical with a pinhole nub, to promote breastfeeding and promote bonding. Nipple shields can be used at any point throughout the feeding, however, they are typically put on initially to help the baby latch and take off once the baby starts to suckle and swallow. There are several various types of nipple shields, and each one affects nursing in a unique way. They can also be used to treat sore nipples and are made of thin, flexible silicone devices worn over the nipple. Nipple shields are only meant to be used temporarily (only until your baby has learned to latch on well or your nipples are no longer flat or inverted). Always consult your doctor before utilizing a nipple shield. You should regularly (at least weekly) weigh your baby to be sure he is acquiring the proper amount of weight because nipple shields can prevent milk transfer.

Additionally, products that can help draw out flat or inverted nipples are readily available. Just prior to nursing, a nipple everter is used to help the nipple protrude and gently add shape. The wonderful thing about this equipment is that it can quickly and easily fix flat nipples without the need for setup or a plug-in.

5. Prevent your Breasts from Enlarging

When your breast size is big, it is more difficult to bring out a flat or inverted nipple. Breastfeed at least 8 to 12 times every 24 hours to prevent your breasts from enlarging.

6. Try out various positions with a deep latch

Encourage your infant to expand his lips widely and across the nipple to help him absorb more of your nipple and breast. In order to make your nipple protrude, try softly pushing back on your breast tissue at the same time.

When the baby latches on, the lips should be fanned out like a fish and the baby’s nose should be touching your breast. Latching, including flat nipple latch is frequently made simpler by experimenting with various postures, such as a football grip or cross-cradle hold.

The ability of many women to breastfeed while having their nipples pierced is unaffected by piercing. However, you should take off your jewellery before feedings as it poses a choking risk and may graze your child's tongue, gums, or palate.

Although there hasn't been much research in this area, some mothers discover that breast milk spills from their piercing holes or worry that the scarring from the piercing is affecting their ability to produce milk.

According to lactation specialists, it is impossible to predict how a piercing would influence breastfeeding until your milk starts to flow in. If you're concerned, consult a lactation consultant or breastfeeding expert. And keep in mind that if one breast is having issues, a baby can still absorb all the nutrition they require from that one.

Keep in mind that breastfeeding is not over when nipples are flat or inverted. Despite having flat or inverted nipples, many mothers still nurse their infants. Even so, it's generally a good idea to talk to a skilled medical professional or lactation consultant both before and after the birth of your child about your worries.

NewMumLife is a parenting website for moms, dads and child care. We aim to offer a place to connect parents and parents-to-be for all types of parenting advice and suggestions to the questions they normally face. Our content is for the parents and by the parents where they share their personal experiences to benefit our parenting community.

Get Your Free Nursery Rhymes eBook

Please log in again. The login page will open in a new tab. After logging in you can close it and return to this page.